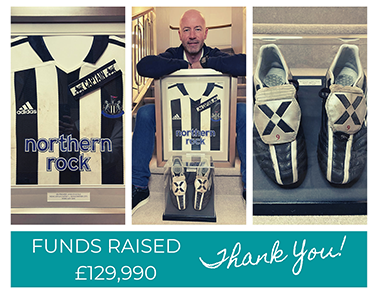 We are extremely grateful to all our supporters for helping to make our prize draw a huge success.  The Foundation has raised a stunning £129,990 to support the work carried out at the Alan Shearer Activity Centre.

During the pandemic, the Foundation has been unable to fundraise in our usual way, so we were so grateful to Alan when he handed us a lifeline by donating his match shirt, boots and captain’s arm band – all worn when he scored his 250th Premier League goal – to help us raise funds for the upkeep of the Alan Shearer Activity Centre.

The prize draw launched on 4 February, with the hope of Alan’s supporters being kind enough to purchase at least one ticket; little did we know we would raise a grand total of £129,990.

The proud winner, Gary Moseley, from South Shields, was pulled from our electronic draw system on the 23 February and announced as the winner on Twitter the same day by none other than Alan Shearer himself.  Gary told us he was “gobsmacked” and that he never thought he would be the one to win.  Later commenting on Twitter, Gary added, “What an amazing prize, but more importantly, what an amazing amount of money raised for a fantastic cause!”

Gary will meet with Alan at the Alan Shearer Activity Centre in Newcastle to accept his prize once Government Covid guidelines allow this to happen safely.

Thank you to everyone who purchased a ticket and donated to us, you have been exceptional in promoting and supporting our cause.

Gary, we hope to see you at the Centre soon!