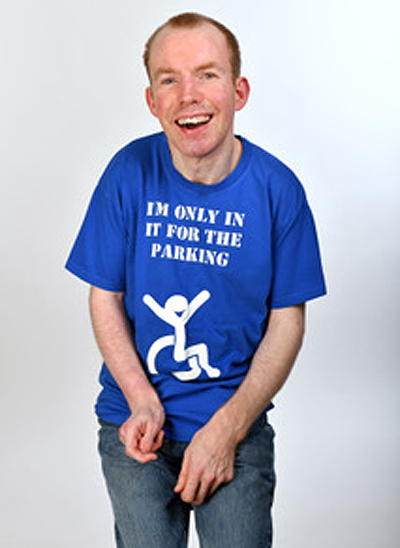 Lee’s found his voice – and everyone wants to hear him

Fans of Britain’s Got Talent, glued to their TVs this week, saw local comedian Lee Ridley win a place in the final on 3rd June.

Lee, who has cerebral palsy and is a long-time member of the Alan Shearer Centre, is one of 40 semi-finalists who made it through from the audition stages – despite being unable to speak!

Lee performs under the stage name of “The Lost Voice Guy” and uses an iPad with a voice synthesizer to tell jokes. Although most of his routine is pre-programmed, he does type in ad-libs during his act. Using his disability as inspiration for many of his gags, he told “Talent” judge Simon Cowell, “I’m a struggling stand-up comedian, who also struggles to stand up!”.

After winning Monday night’s show, Lee had a nasty fall in his hotel room on Tuesday, but says he will definitely make the final, regardless. Posting a selfie online showing cuts on his face and a sticking plaster across his nose, he tweeted, “Lost Voice Guy became Lost Balance Guy for a moment. Don’t worry though, I’m feeling fine again now and am looking forward to the final.”

Whatever happens in Sunday’s final, you can hear more from Lee in a new comedy series he writes and stars in, on BBC Radio 4.

Good luck, Lee. All your friends from the Alan Shearer Centre will be watching and cheering you on!